One of the most highly revered plants in Ayurveda, Guduchi is also referred to as “Heavenly Elixir” and the “Nectar of Life”. It has also been described as “one which protects the body”, with the many actions of this herb making it effective in the treatment of a wide variety of ailments.

In Ayurvedic Medicine, Guduchi is classed as bitter and astringent with a special action to destroy toxins – both internally and externally. It is traditionally used to promote life and longevity, increase strength, increase appetite, as an aphrodisiac, a blood cleanser, digestive aid, to alleviate skin disorders and as an adaptogen.

Guduchi is an important herb that has been used in Ayurvedic Medicine for thousands of years. Also called Tinospora cordifolia, Giloy and the Nectar of Life, this plant is commonly found in India, Sri Lanka and Myanmar. It boasts of heart-shaped leaves, and its stem contains most of the healthy ingredients.

One of the most popular uses of this herb is making it into tea. Take 1 teaspoon of the dried cut stem, a couple of peppercorns, 3 to 4 cumin seeds and boil them in water. Steep for 15 minutes, and drink 3 to 4 times a day. Guduchi is known for its detoxifying properties and help in respiratory diseases. It helps boost immunity and heals liver problems too. Here are more benefits to adding this herb to your daily diet. 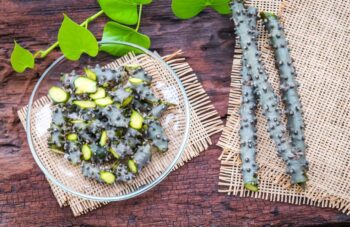 According to myth, when the ancient gods churned the primordial ocean, an ambrosial nectar was created that would grant immortality to any who drank it. The nectar was named “amrit”, a Sanskrit word that means “imperishable.”

The sacred origin of Guduchi is described in the Indian epic “The Ramayana” and the sacred text of the Durga Saptshati. Vaidya Ramakant Mishra recounts the myth of Guduchi from The Ramayana saying that Guduchi began growing on Earth from the hands of Lord Indra. Lord Rama made a special prayer to Lord Indra asking Indra to resurrect all the monkeys and bears from his army that had died during the war with the rakshasa (demon), Ravana. Upon hearing the wish from Rama, Lord Indra granted Rama it and sprinkled nectar from the heavens to resurrect the animals. As the nectarous drops fell upon the bodies of the dead monkeys and bears, they suddenly came back to life. The nectarous drops that fell on the Earth formed the sacred Guduchi plant.

One of the most popular uses of this herb is making it into tea. Take 1 teaspoon of the dried cut stem, a couple of peppercorns, 3 to 4 cumin seeds and boil them in water. Steep for 15 minutes, and drink 3 to 4 times a day. Guduchi is known for its detoxifying properties and help in respiratory diseases. It helps boost immunity and heals liver problems too. Here are more benefits to adding this herb to your daily diet.

Another of the many names attributed to this powerful herb is the “Nectar of Immunity”. Studies have found that Guduchi supplementation can enhance the ability of macrophages – immune cells that engulf and digest cellular debris, foreign substances, microbes, dangerous bacteria, and anything else that does not have the type of proteins specific to healthy body.

A detailed study looking at the effectiveness of Guduchi on the immune system was published in the “Journal of Immunology Research” in 2017. It was concluded that, “T. cordifolia and its constituents have been shown to possess immune-stimulating properties. T. cordifolia and its constituent α-D-glucan stimulate NK (natural killer) cells, B cells, and T cells with simultaneous production of various immune-stimulatory cytokines…… it can be concluded that aqueous and methanolic extracts of T. cordifolia possess immune stimulatory, antimicrobial, hepatoprotective, and antioxidant properties.”

Guduchi has also been found to be particularly effective against allergy symptoms such as allergic rhinitis, significantly reducing symptoms including stuffiness, sneezing and itching. It is known in Ayurveda as a histamine stabiliser and in animal studies it has decreased histamine-induced bronchospasms (tightening of airways and difficulty breathing) and helped stabilise mast cells.

Many studies have been done on Guduchi’s ability to heal the liver and reverse damage, especially that which is related to alcoholism. One study found that a 14 day treatment with Guduchi extract reversed various biomarkers related to liver damage.

The ability of Guduchi to assist in detoxification is primarily attributed to its potent antioxidant properties. It increases the activity of antioxidant enzymes, scavenges harmful free radicals and controls their production. Alkaloids such as choline and palmatine present in the herb contribute to its antioxidant power. The liver is primary detoxification organ in the body; Guduchi cleans the whole system principally through its purifying and building actions upon liver tissue.

Guduchi has long been used as an anti-diabetic herb in Ayurveda and has been proven to significantly lower blood sugar. Much research has been conducted on this herb in relation to diabetes and it is thought that the powerful plant compound berberine is partly responsible for its effect on blood sugar.

A study published in the “Journal of Ethnopharmacology”, showed the efficacy of Guduchi in treating diabetes mellitus by lowering blood glucose levels and brain lipids in diabetic rats, concluding that Guduchi extract has hypoglycaemic (sugar lowering), and hypolipidaemic (fat metabolising) effects. Another study found that blood glucose levels decreased significantly in patients with moderate and severe diabetes who took Guduchi extract for 3 or 15 weeks.

Traditionally taken 2-3 ml 2-3 times per day, or as directed by a Herbal Practitioner.

Guduchi can cause gastrointestinal upset when taken in large doses for long periods of time.
Not recommended for use during pregnancy or breastfeeding due to a lack of safety studies.

Please consult with your healthcare practitioner if you have diabetes and are considering using Guduchi. Do not take with diabetic medication as the blood sugar lowering effects could cause the blood sugar to fall too low.